Hardly a week after being relieved of the Premiership, the army led by one of the Chief of Staffs raided the residence of the outgoing Prime Minister under the guise of withdrawing his military escort unit and replacing them with the Police VIP unit personnel.

When the NRA took over power 28years ago all the senior officials took residence in the posh suburbs of Kololo and Nakasero. They pitched camps of armed escorts within their respective residences. Some Generals like Tumwine even closed off entire road stretches that passed near their residences. These senior officials even compete on who had the biggest house, number of armed soldiers, sophisticated armament and the fleet/convoy of escort cars. In the absence of formal ranks, this show of strength was the determinant of seniority. There would even be occasional exchange of fire between these escorts following brawls between some of their rowdy bosses in night clubs.

Amama Mbabazi had been a member of FRONASA, a Lieutenant in the post Iddi Amin UNLA and its Director of Legal Services, fled to Nairobi where he remained as the leading member of the NRA external wing. Upon taking over power, no doubt he was a very powerful person whom the rank and file of the NRA could not distinguish as to whether he was a soldier on not. He too like other senior NRA officials took residence in the Kololo residential area and acquired all the armed sophistication. His first assignment was Director General of External Security (DG/ESO). He was later to hold the positions of Minister of State for Defence, Minister for Security etc. He would attend all the army council and high command meetings, chair the joint intelligence council (JIC) and coordinate the intelligence agencies. Mbabazi commanded a lot of authority among the security circles that even the most senior army Generals could not distinguish whether he was above them or they were below him. At times Museveni would even delegate him to chair the Army Council. When formal ranks were introduced, Museveni deliberately gave him no army number and rank despite the fact that even the fallen members of FRONASA were also awarded. This is because Museveni wanted to please the senior NRA officers whom Museveni had earlier told that members of the External Wing including Mbabazi had failed to mobilise resources for the fighters. However, going by the nature of sensitive positions that Museveni has assigned Mbabazi for the last 28 years and the political protection against alleged abuse of office, Mbabazi was made to believe that Museveni was grooming him for succession. This is why he (Mbabazi) at one time stated that Besigye was trying to jump the succession queue. IT IS WORTHY NOTING THAT AT THE TIME ERIYA KATEGAYA SEEMED TO BE THE NUMBER TWO BEFORE HE DIED OF 'LACK OF PHYSICAL EXERCISES'!

The escort units of respective senior officials comprises of Aide De Camps (ADCs), armed guards and military communication radio operators commonly known as Signalers. The armed guards are subdivided into those guarding the Kampala residence, the upcountry home, farm or ranch, those stationed at the office, those guarding the family business premises, those guarding the construction site if any, those always in the company of the principal, his/her spouse and children. In some instances some guards can even be assigned to relatives, friends and in-laws. The higher the principal's position and its accruing financial benefits, the bigger the number of escorts to be sustained. Such guards are always counted to be under the army General General Headquarters by establishment but its the respective official who has a final say over the choice,  retention and return to unit (RTU) of any escort unless he is facing a disciplinary action as is the current case of Mbabazi. It is very common to find someone who started as an escort to a senior official 28 years ago is still in the same position. Others even keep their immediate families within the premises of their bosses. In some cases depending on the boss's generosity, the escort is facilitated to rent a house outside and capital to start an income generating activity. For others they have struck fortunes by being involved in running private business errands for their bosses. The live example is of Juma Seiko the long time Aide to General Saleh. The result has been that many even forget about mainstream military service while others even desert. Apart from Museveni and Mbabazi, all the initial senior NRA officials have undergone descending or loss of prestige implying that Mbabazi has retained his original escorts for the last 28 years.

Apart from arms and personnel composing such guard units, there is one most vital component - the military communication radio.  A radio equipment for military communication with a call sign is attached to the security detail of such official complete with radio operators/signalers. The radio equipment enables the official to keep in touch with all administrative, command & control, and operational developments in all units of the army whether in the country or outside. Even when Museveni is in New York his military radio network is active and communicates with the entire NRA whether in Moroto, Mogadishu or CAR.  This is a privilege of very few top NRA officials. Even within the military establishment, not every Tom and Dick has access to these radio communication. The radio communication centre (Signal Centre) is out of bounds for most Officers and men save for just a few. Most of the messages generated are 'classfied and restricted'.  Not even the Vice President, Kigongo, ministers or the current Prime Minister can have access to this military communication network but Amama Mbabazi had it right from 1986 till late this week. Depriving Mbabazi of this privilege is a serious sign of mistrust. For the last 28 years, before Mbabazi goes to office, gets lunch or goes to bed he had to read the message book where all the developments in the security apparatus are recorded by his signaler. At his village home in Kihihi there is this strong communication gadget that is used to monitor and intercept military communication of neighboring countries and other hostile armed groups in the DRC. It was designed by his right hand man Col. Victor Twesigye formerly of ISO's 'Operation Rabbit' who is now the NRA's Director of Communication (Signals).
Museveni has designed a more sophisticated mechanism within this radio communication network codenamed 'Kibali' whereby a few chosen top officials are able to use coded communication via these radios without other users breaking into their codes not even some of the radio operators. Mbabazi was one of the few top officials under the 'Kibali' arrangement. Therefore, by the army taking away his radio and removing him from this net (network) he is terribly incapacitated and he now realises that Museveni is all out to reduce him to an ordinary person.Mbabazi as a person must have been legally in possession of arms like an SMG, Pistol and ammunitions which have not been withdrawn because his house was not searched.
Being denied access to military radio communication and escorts is the strongest sign of losing favor with Museveni. The likes of Jim Muhweezi, Saleh, Tumwiine, Aronda etc still have their military guards and radio network intact. Now for Mbabazi, he will have to wait for the mass media  and news bulletins so as to know why there was a shooting in his neighborhood the previous night or the security situation at the Uganda/Congo border a few kms from his home. He has the cash well but it can not buy information for "information is power". The information black out is further worsened by withdrawing all his military escorts some of who have been subjected to search and arrest. Could they have been used to gather information for the 'Kipingamizi'? We are yet to see the fate of his equally powerful Aide Captain Katabazi.

THEREFORE THE ORDER TO WITHDRAW MILITARY GUARDS FROM MBABAZI'S SECURITY DETAIL AND TO DISCONNECT HIM FROM THE MILITARY RADIO NETWORK WAS GIVEN BY MUSEVENI HIMSELF. The heavy deployment and the press coverage was meant to overwhelm Mbabazi. They did not anticipate any resistance or confrontation. This is what Museveni alluded to when he stated that "AM A WAR GENERAL AND NOT A CLASSROOM GENERAL" immediately after the Kyankwanzi resolution and since then he is always in full military combat uniform 24/7. It will take alot of hardwork for Museveni's intelligence handlers to convince him that Mbabazi is linked to any form of trying to gain the top office by use of the military. The Police VIP guards are nothing but members of the newly founded Kayihura intelligence outfit tasked to maintain surveillance on Mbabazi's movements and dealings and at worse to frame him over subversive activities.

UGANDA: HON. AMELIA IS ACTING AS A CABINET MINISTER, NOT MUSEVENI'S AIDE

NOTE FROM EDITOR: The articles being posted during the pandemic lockdown will not be edited until after we return to work normally.  ... 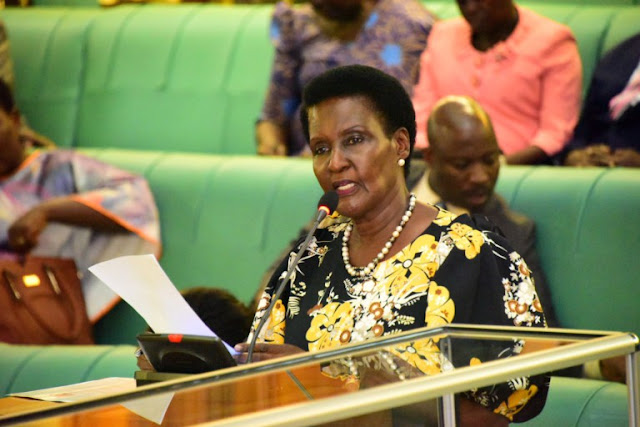