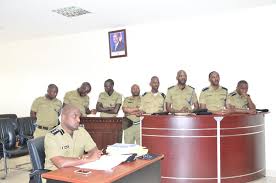 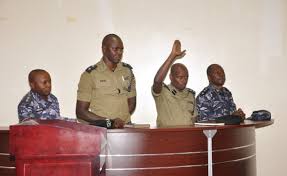 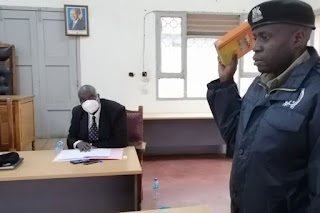 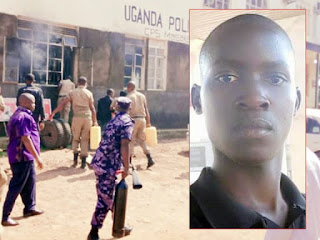 CHANGE OF GUARDS: The Museveni Police has this week, once again, duped Ugandans by offering protection to its own through a sham trial.  Two officers from Masaka Police Station were reportedly dismissed from service by a police court that found them guilty of 'corrupt tendencies and scandalous conduct' arising from the incident where a Bodaboda rider burnt himself to death inside the said Police Station. The said youthful victim of suicide by immolation had failed to pay a bribe to recover his impounded motorcycle from the hands of the police.  The Police Professional Standards Unit (PSU) has in the same regard summoned four other police commanders in that region to appear and further explain the same incident.

The Police Act of 1994 Cap 303 created a Disciplinary Code of Conduct as a basis for disciplinary control. It has three categories of courts to deal with disciplinary offences. They are Subordinate Police Courts, Regional Pooice Courts and the Police Council Appeal Court. It makes it clear that "nothing in the Act shall effect the jurisdiction of any ordinary civil court to try a person from an offence triable by a Police Disciplinary Court".  Under S.58, it is stipulated that such criminal proceedings by the civil courts shall take precedence over disciplinary proceedings by the police courts.

In July 2017, the police put in place the Professional Standard Unit (PSU) to "handle complaints against its personnel from the general public."  Located in Kampala, it took over the role that was previously handled by its Human Rights and Complaints Desk.   Though initially mandated to investigate and send files of complaints to its Directorate of Human Rights and Legal Services, Police Standby Court and DPD, it eventually assumed judiciary powers by trying capital offences like murder, attempted murder, torture and corruption.  Like is the case with the police disciplinary courts and in Military Courts, they do this by turning around what would amount to criminal offence into disciplinary offence thus criminal charges are turned into disciplinary charges respectively. A clear act of corruption or torture and attempted murder is presented as scandalous conduct or simple assault at best so that its personnel can easily get off the hook.

On the contrary, if the police criminal offenders were to be tried by the ordinary civil courts, most of the criminal charges against them would be guided by the Anti-Corruption Act of 2009, the Prevention & Prohibition of Torture Act of 2012 and the Uganda Human Rights (Amendment) Act of 2019.  The Anti-Corruption Act penalizes a public official involved in corruption to imprisonment not exceeding seven years on top of forfeiture to the state. It stipulates that corruption related charges shall only be preferred with consent of the DPP or the IGG.  Jurisdiction to try corruption related cases and rstricter to only the High Court, the Chief Magistrate and Magistrate Grade One courts.  The Anti-Corruption Division of the High Court was established with original jurisdiction to try all corruption related cases. It is headed by a Judge and assisted by two Chief Magistrates and four Grade One Magistrates.

The Prevention and Prohibition of Torture Act imposes a 15 years imprisonment for those convicted of corruption.  It stipulates that torture charges must be consented to by the DPP and that jurisdiction to try such cases lies with the Chief Magistrate's Court. You will note that the Police Act of 1994 does not define torture or provide a penalty but only stipulates that a complaint over torture could be made to a Magistrate who in turn has to order for an investigation. The Anti-Terorism Act of 2012 penalizes torture with five years imprisonment - nine years less than the 15 years imposed by the Anti-Torture Act. The discrepancy is meant to protect security officers who torture terrorism suspects.

Two court cases generated rulings to the effect that police officers and other state agents implicated in violation of human rights of suspects will be liable as individuals and not as an institution. In a 2010 unanimous ruling by a panel of five Justices led by Augustine Nsimiye;

".......the time has come for legal practioners to consider in cases of this nature adding as parties the perpetrators and their supervisors of challenged actions in their personal capacity so that they can face civil consequences for their wilful disregard of the fundamental rights and freedoms of the people of this country."

The ruling came as a big relief to the Museveni regime that had always argued that acts of human rights abuses were not institutionalized but attributed to individual errant officers. It gave assurance to officers of maximum protection against such civil consequences for their acts of torture during the course of official business. One such guarantee of protection is the Police Court that turns around torture into simple assault.

Amidst the excitement of that relief, in March 2019 the Museveni regime enacted the Uganda Human Rights (Amendment) Act of 2019.  S. 10 of the Act stipulates personal liability for infringement of rights and freedoms by public officers.  S. 2 (1) empowers court to order for compensation or any form of restitution to the victim and the implicated officer is required to pay a portion or restitution order so ordered as shall be determined by court.  Consequently, on July 3 the chief of police sent a circular to all the police stations alerting personnel about the new law that placed personal liability on individuals officers for which they were to incur the cost of compensation in the event of an award of court.

Therefore, from the aforegoing, it can be authoritatively concluded that Museveni's police courts are meant for only entertaining disciplinary related issues and not criminal acts like corruption, torture and violation of human rights in general. The puported trial by way of reduced charges is a deliberate act by the regime of rendering protection to its agents and a miscarriage of justice. It is a way of rendering protection to its personnel from facing criminal charges before the ordinary civil courts for appropriate justice to victims. It has worked for the army and now it is working for the police.

The state does not pay victims the compensation ordered by court. Equally, the individual police personnel not only lack the capacity to pay but such an order is unenforceable.  Otherwise, despite the cosmetic regulations, the police corruption and gross abuse of human rights has and will continue un abetted.

INFORMATION IS POWER AND THE PROBLEM OF UGANDA IS MUSEVENISM
at 22:01 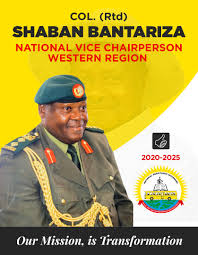